Just the Facts About the Age of the Earth postcard 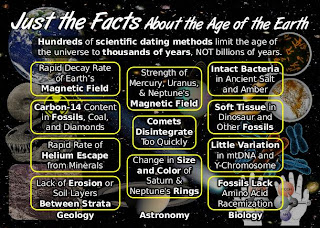 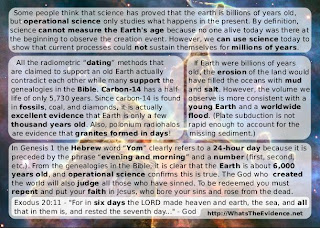 card credit: Randy Brandt and the What's the Evidence? Team
Posted by Profile at 10:26 AM No comments:

Email ThisBlogThis!Share to TwitterShare to FacebookShare to Pinterest
Labels: age of the earth

Evidences for a Young Earth

Age of the earth

There are many categories of evidence for the age of the earth and the cosmos that indicate they are much younger than is generally asserted today.

Can science prove the age of the earth?

No scientific method can prove the age of the earth and the universe, and that includes the ones we have listed here. Although age indicators are called “clocks” they aren’t, because all ages result from calculations that necessarily involve making assumptions about the past. Always the starting time of the “clock” has to be assumed as well as the way in which the speed of the clock has varied over time. Further, it has to be assumed that the clock was never disturbed.
There is no independent natural clock against which those assumptions can be tested. For example, the amount of cratering on the moon, based on currently observed cratering rates, would suggest that the moon is quite old. However, to draw this conclusion we have to assume that the rate of cratering has been the same in the past as it is now. And there are now good reasons for thinking that it might have been quite intense in the past, in which case the craters do not indicate an old age at all (see below).

No scientific method can prove the age of the earth or the universe, and that includes the ones we have listed here.

Ages of millions of years are all calculated by assuming the rates of change of processes in the past were the same as we observe today—called the principle of uniformitarianism. If the age calculated from such assumptions disagrees with what they think the age should be, they conclude that their assumptions did not apply in this case, and adjust them accordingly. If the calculated result gives an acceptable age, the investigators publish it.
Examples of young ages listed here are also obtained by applying the same principle of uniformitarianism. Long-age proponents will dismiss this sort of evidence for a young age of the earth by arguing that the assumptions about the past do not apply in these cases. In other words, age is not really a matter of scientific observation but an argument about our assumptions about the unobserved past.
The assumptions behind the evidences presented here cannot be proved, but the fact that such a wide range of different phenomena all suggest much younger ages than are currently generally accepted, provides a strong case for questioning those accepted ages (about 14 billion years for the universe and 4.5 billion years for the solar system).
Also, a number of the evidences, rather than giving any estimate of age, challenge the assumption of slow-and-gradual uniformitarianism, upon which all deep-time dating methods depend.

When the evolutionists throw up some new challenge to the Bible’s timeline, don’t fret over it. Sooner or later that supposed evidence will be turned on its head and will even be added to this list of evidences for a young age of the earth.

Many of these indicators for younger ages were discovered when creationist scientists started researching things that were supposed to “prove” long ages. The lesson here is clear: when the evolutionists throw up some new challenge to the Bible’s timeline, don’t fret over it. Sooner or later that supposed evidence will be turned on its head and will even be added to this list of evidences for a younger age of the earth. On the other hand, some of the evidences listed here might turn out to be ill-founded with further research and will need to be modified. Such is the nature of science, especially historical science, because we cannot do experiments on past events (see “It’s not science”).
Science is based on observation, and the only reliable means of telling the age of anything is by the testimony of a reliable witness who observed the events. The Bible claims to be the communication of the only One who witnessed the events of Creation: the Creator himself. As such, the Bible is the only reliable means of knowing the age of the earth and the cosmos. See The Universe’s Birth Certificate and Biblical chronogenealogies (technical).
In the end the Bible will stand vindicated and those who deny its testimony will be confounded. That same Bible also tells us of God’s judgment on those who reject his right to rule over them. But it also tells us of his willingness to forgive us for our rebellious behaviour. The coming of Jesus Christ, who was intimately involved in the creation process at the beginning (John 1:1–3), into the world, has made this possible (see Good news).


Biological evidence for a young age of the earth

The finding of pliable blood vessels, blood cells and proteins in dinosaur bone is consistent with an age of thousands of years for the fossils, not the 65+ million years claimed by the paleontologists.

Geological evidence for a young age of the earth

Radical folding at Eastern Beach, near Auckland in New Zealand, indicates that the sediments were soft and pliable when folded, inconsistent with a long time for their formation. Such folding can be seen world-wide and is consistent with a young age of the earth.

Measured erosion rates at places like Niagara Falls are consistent with a time frame of several thousand years since Noah’s Flood.

Along the mid-ocean ridges, the detailed pattern of magnetic polarisation, with islands of differing polarity, speaks of rapid changes in direction of Earth’s magnetic field because of the rate of cooling of the lava. This is consistent with a young Earth.

Radiometric dating and the age of the earth

Saturn’s rings are increasingly recognized as being relatively short-lived rather than essentially changeless over millions of years.

Human history is consistent with a young age of the earth

Posted by Profile at 7:39 AM No comments:

Back to What's the Evidence